Back to Latest News

Hyundai targets hydrogen FCEV price parity with EVs: Hyundai FCEVs to cost the same as EVS by 2030, company to be carbon neutral by 2045 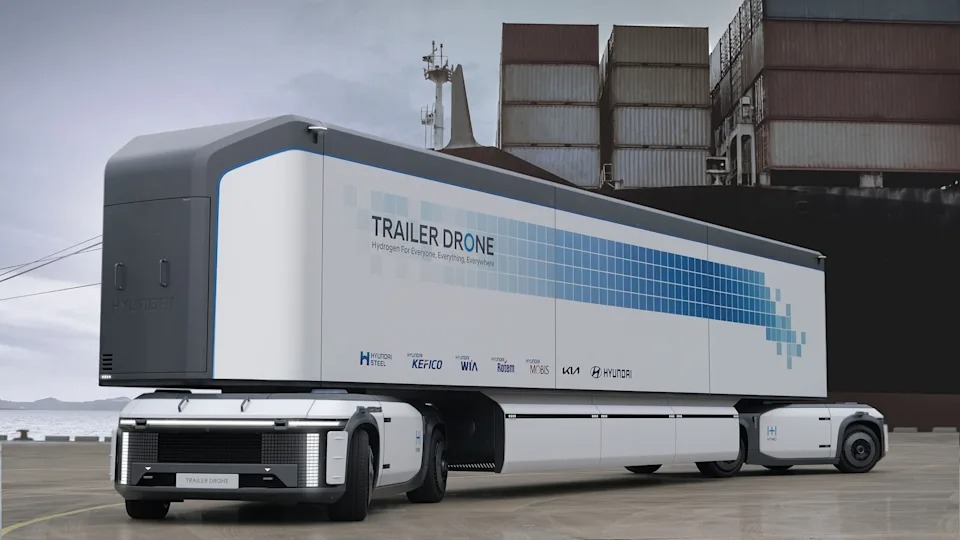 Gas giant: Hyundai’s futuristic fuel cell drone truck might not make it to production, but it signals big hydrogen aspirations for the South Korean company.

HYUNDAI has laid bare its ambitious plan to bring its hydrogen fuel cell technology to price parity with battery electric vehicles within this decade.

Eliminating that price barrier is a central part of the company's new Hydrogen Vision 2040 strategy, and one that it hopes will accelerate adoption of fuel cell vehicles (FCEVs) in the long term.

The Hydrogen Vision 2040 plan is Hyundai's pathway toward dramatically reducing its net emissions, with the automaker pledging to reduce its total carbon emissions to 75 percent of 2019 levels by 2040, with net zero CO2 emissions expected by 2045.

Like most automakers, an almost wholesale transition to electrified product is central to achieving Hyundai's environmental goal: by 2040, it hopes that zero-emissions vehicles will account for around 80 per cent of its total sales.

However, unlike most other automakers, Hyundai is making big bets that hydrogen power will make up a sizable proportion of its future green vehicle fleet.

While battery EVs of all kinds continue to proliferate, FVECs are still struggling to get off the ground.

Besides limited availability of fuel cell cars – only Hyundai and Toyota currently offer FCEVs to the public, with Honda recently withdrawing its FCX Clarity – and a scarcity of refueling stations, the other key barrier to widespread adoption is cost.

However, Hyundai expects it will be able to offer fuel cell vehicles at price parity with a comparable electric vehicle by the end of this decade, at which point the company expects hydrogen technology and infrastructure will have also caught up to public expectations.

According to Hyundai, the secret to reducing the price of fuel cells comes down to continued research and development into materials technology, and refinement of its fuel cell designs.

The company is on track to release its third-generation fuel cell stack in 2023, which comes in two output levels (100kW, and 200kW) and incorporates many lessons learned from its previous fuel cell designs.

The 100kW system is 35kW down on the second-gen stack that powers the current Nexo, but it's about 30 per cent smaller and thus much easier to package into a wider range of vehicles.

Looking at them side by side it's also apparent that the design of the third-generation stack is more simplified than its predecessor, something that reduces complexity and eases mass production – both things that greatly affect the overall cost of each unit.

While EVs have most of their production costs sunk into their battery packs, for an FCEV it's the fuel cell that's the most expensive single assembly.

Simplified design coupled with a reduction in the precious materials required, such as platinum, have Hyundai hopeful that it can reduce the cost of its fuel cells by half compared to its current second-generation design.

With the current Nexo retailing in the USA for roughly A$80,000, chopping its production costs by nearly half should result in a far more palatable pricetag for the consumer.

Meanwhile the 200kW fuel cell stack is slightly larger, and is the one that will do most of the heavy lifting in the commercial sector.

With the modular fuel cells able to be daisy-chained together, two 200kW stacks would easily provide the same level of power as a prime mover's diesel powertrain while occupying the same physical space.

Hyundai's hydrogen assault will initially focus on converting its entire commercial vehicle portfolio to a fully electrified lineup by 2028, with all of its buses, trucks, prime movers and vans either powered by batteries or hydrogen fuel cells after that date.

With commercial road transport accounting for the bulk of global vehicle emissions, Hyundai sees the elimination of combustion engines in the truck sector to be a matter of urgency.

So much so, that it has already commenced trials with select transport companies in Switzerland, using its Xcient Fuel Cell truck.

At the announcement of Hydrogen Vision 2040, just two passenger FCEVs were confirmed: a new-generation Nexo, and a fuel cell variant of the Staria people mover.

Both are due to debut in 2023, and both will make use of Hyundai's third-generation fuel cell stack.

Other passenger models will follow from 2025, with Hyundai's sister brands Kia and Genesis expected to debut their own FCEVs in the latter half of this decade as well.

Get a Quote Test Drive Contact Us Book a Service